The Paris attacks of November 15th felt like a stab into the hearts of the French and European society. The terrorists have made a negative impact and that is exactly what they want. As we feature the Aparthotel Adagio Paris Tour Eiffel on our platform, many of our clients have asked us: is it safe to travel to Paris these days? In this blogpost we want to elaborate on this question.

Is it safe to travel to Paris these days?

Jihadis primarily from France and Belgium have systematically prepared and executed the terroristic attacks in Paris. In total, 129 people were killed. This was the biggest extend of a terroristic attack in France. Special entities of the police have killed the wire-puller of these attacks Abdelhamid Abaaoud. So is it safe to travel to Paris these days? There is no right answer to this question. In the end, it depends whether you feel comfortable with the situation. But bear in mind that the residents in Paris move on as well. They bring their kids to the kindergarden, take the metro to work and eat out in restaurants. That is the reason why tourists should also move on and enjoy the full beauty of Paris despite the recent tragedy.

Defending our values of freedom and liberty

In our humble opinion, our society has to stand together and move on. We have to defend our values of freedom and liberty which had to accept a big hit after the terroristic attacks. In the name of the victims of the terroristic attacks, it is our duty to live and move on and show no respect for these horrible attacks. We totally understand that many people feel uncomfortable or worried about traveling to Paris. This is in the nature of a human being. However, if we show fear and limit our lives, the terrorists have reached their goals. If our society decides to move on and build on the values of freedom and liberty, we show that our society is mature enough to take these kind of horrible hits.

Close collaboration among intelligence agencies and the police

We have to trust the French and European authorities that they do everything which is in their hands to avoid such a tragedy again. But of course, nobody can promise that such attacks will not happen anymore. So again the question: Is it safe to go to Paris these days? There is no standard answer for that. But there is also no standard answer to the question whether it is safe to go to London, Berlin, Rome or Vienna these days. Remember that the odds of being a victim of terroristic attacks are quite small. Let’s show full respect to the victims of the recent attacks in Paris and Beirut and move on! 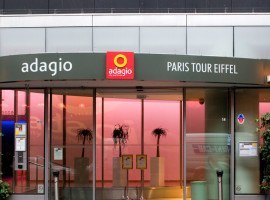